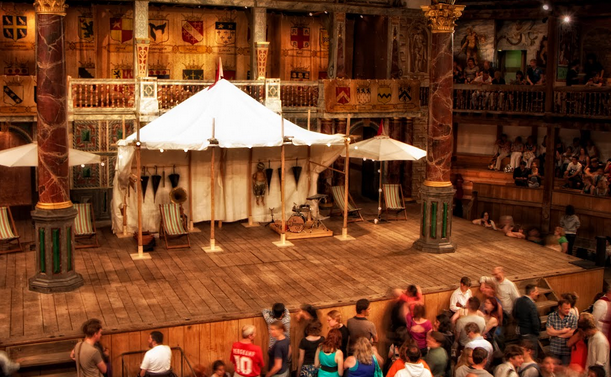 “Can this cockpit hold
The vasty fields of France? Or may we cram
Within this wooden O the very casques
That did affright the air at Agincourt?”

These lines from the Prologue in Shakespeare’s Henry V, encapsulate the challenges faced by set designers and props departments when staging a Shakespeare play. Shakespeare’s scenes can be vast, from the field of Agincourt, to blasted heath in King Lear. How can props and sets help to portray scenes such as these?

Shakespeare’s productions at The Globe were minimalist affairs. They called upon the imaginations of their audiences through necessity, and were no less powerful because of it. That tradition continues in modern day productions at the current Globe. But if you wish to suggest a major change of location, consider using a backdrop in your production. We have a wide number of woodland landscapes, which would suit A Midsummer Night’s Dream and rural landscapes, which could provide a wider vista for battles or heathland. Skilful use of lighting will transform these backdrops from day to night, more intimate – such as the witch’s scene in Macbeth – to the climactic, such as the battle scenes in Henry V.

Shakespeare’s Globe had a modest props department, mainly housed in the Tiring House, just behind the stage. One inventory suggests they owned just the following items: goblets and plates, candles and torches, writing materials, chairs and stools, wine or ale bottles, whips, baskets, skulls, a throne or large chair, furs, banners and flags, armour, swords, fake jewellery, crowns, maps, armour, tools, trumpets, flowers, caskets and boxes. Heavy items, such as large tables, would be left on the stage throughout the production, and maybe just moved to the side of the stage to free up the acting space. All the props where keep in order by the ‘prop man’.

Of course, the joy of Shakespeare is that you can set his plays in whatever era you wish. You may want to bring your production right up to date and set it during the 20’s, during WWII, or in a modern urban landscape. We have plenty of props and backdrops for whatever period in which you wish to set your Shakespeare production.

Visit the Globe Theatre Exhibition to see examples of craftsmanship in maintaining and producing props and costume. The props business has a very long pedigree.