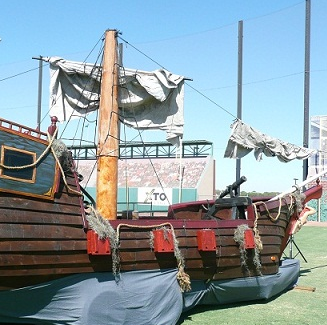 Ship Props and Sea Props – All At Sea

The sea has provided filmmakers with a wealth of inspiration. Let’s look at two blockbuster movies that have captured the public’s imagination, and consider the ways in which Stockyard Props can help you dress a nautical film, play or TV set. We have a huge array of props to help you achieve the look you want, from a steamer like the Titanic (2009), to an old whaling ship like the one in Moby Dick (1956).

Stockyard Props were able to get hold of a collection of set items from the film Battleship, released in 2012. Many of the items we secured are ideal for ship dressing from any modern era. In the film Titanic, the set was one of the biggest ever built. It was virtually to scale, and required 40 acres of waterfront to house its construction. Because it was being built from scratch, all the props needed were meticulously reproduced or sourced from original documents. The director James Cameron even hired production historians to ensure accuracy.

“The rooms, the carpeting, design and colours, individual pieces of furniture, decorations, chairs, wall panelling, cutlery and crockery with the White Star Line crest on each piece, completed ceilings, and costumes were among the designs true to the originals”

This attention to detail is now standard in all Hollywood and TV productions, and it can prove to be a headache for a props department. Luckily, we have an extensive collection of ad hoc period props that can help dress scenes, from entire period dining settings, to lighting, curtains, switch gear and doorways. We have interior steel ships doors, and porthole windows, which you can see the sea flooding through in Titanic. We have railing sections, just like the ones Kate Winslet and Leonardo Di Caprio leaned on. We can’t promise to supply a horizon tank holding 17 million gallons of water, such as that used in the Titanic, but we are sure we stock pretty much everything else you might need for your production.

Who can forget Gregory Peck and Orson Welles in Moby Dick? Filmed in the Irish Sea off Strumble Head in Pembrokeshire, it gave rise to perhaps the best prop disaster story of all time. The huge rubber whale used in the film was 75-foot long, and weighed 12 tons. It was manufactured by Dunlop in Stoke on Trent, under a blanket of secrecy. Unfortunately, during filming, the beast decided to make a break for the open seas, with Gregory Peck clinging on to its back. It was buoyed up with 80 drums of compressed air and  somehow the towrope detached from the boat that was pulling it; Peck was rescued, but the whale is still out there somewhere. It was never recovered.

Again, we don’t have a 75-foot rubber whale in stock, but everything else you would need to stage a period ship dressing we can supply. We have large quantities of rope, ships lanterns, chains, anchors, mock harpoons, floats, buoys, pulleys, ships’ wheels, sailcloth, ladders, baskets, triple-iron hooks, barrels, bottles, lobster pots, fishing nets, canons, and rigging. Whether you want to dress a simple fishing boat, or a larger film or tv production, we can help you. Have a look at our Ships Dressing section to see a small selection of what we have on offer.