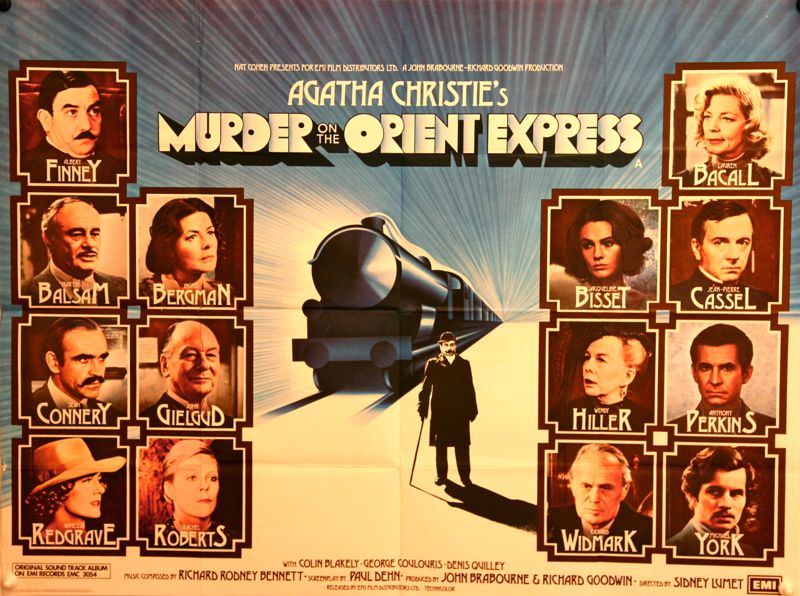 How many films or dramas can you think of that are set on trains? We came up with twelve, but there must be many more. Here we look at some train-based dramas, which required period and modern dressings.

Trains featured in films include Dr Zhivago, The Taking of Pelham One Two Three, and The Lady Vanishes. But perhaps the most train-centred film of them all is Murder on the Orient Express. The 1974 Sidney Lumet production is perhaps the most famous, due to its stellar cast, who played their parts to perfection.

The action takes place almost entirely on board a train. The set designers needed entire train carriages in which to film, and several individual cabins and corridor sets. The period setting required the doors and panelling to be heavyweight wooden constructions. Sliding doors and opening doors are glazed and helped to emphasise the action in various parts of the story. Events and characters glimpsed through a window are a common movie device. Exterior shooting for the film was moved to France, but many on board scenes were shot in the studio. Sidney Lumet talks about the production here, and in this short interview you can see some great close up shots of the interior of the carriages. One feature of the Orient Express film is the beautiful period detail, both in the costumes and props. The mealtime scenes were particularly elaborate, with china dishes, crystal glasses and silver cutlery. These emphasised the opulence of the train itself, and the status of the characters on board. Lighting was almost certainly copied from the original Orient Express carriages.

There are many modern productions set on trains, and TV companies make good use of our stock when shooting. Recently, The 7.49 TV drama, starring Olivia Coleman and Sheridan Smith, used the train setting to confine two characters, who are thrown together on their daily commute. This was an interesting alternative to the most common type of train drama – action or crime. Trains lend themselves well to action drama, with the speed of the train and the rigidity of the train timetable adding urgency to the action. It is easy to see how the ‘jumping from a speeding train’ scenes became so popular. One of the more recent train TV dramas was The Great Train Robbery, filmed in Yorkshire. The re-enactment of the robbery was moved here due to a lack of suitable intact older train stations in the South. Period accurate detail is incredibly important, even in relatively modern settings, such as this, which only dates back to 1963. You can see interviews with the director and cast, location photos and a clip from the two-part series on the BBC website here.

We can supply modern train doors, seating and carriage interiors, including tube train doors and seating. We have both internal and external train doors, and rows of seats, luggage racks and luggage props for hire. For all our train dressing supplies, see the Train Props category of our website.

So You Want To Work With Props?