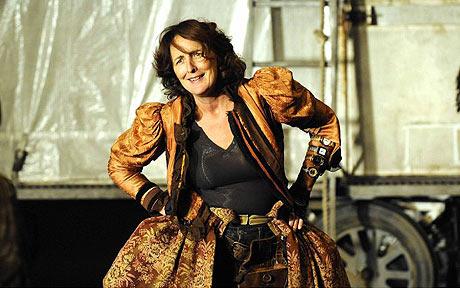 Today we look at a production of Bertold Brecht’s Mother Courage And Her Children, which was performed at the National Theatre in 2009. The story is broadly a cautionary tale for those who try to profit during wartime. It is a presented considerable challenges to the prop and set designers. In the play, Anna Fierling – ‘Mother Courage’ – loses all three of her children as she makes a killing from the war. It is interesting to look at the design choices the director made, and consider ways in which you can apply the same approach to your own productions.

In the National Theatre’s production, the designers were asked to create a ‘credit crunch’ set to save money, so they employed the Brechtian notions of ‘alienation’ and ‘epic theatre’. Brecht’s intention was to bring about a critical frame of mind in the audience by not allowing them an empathetic involvement with the actors or stage – to speak to the mind, rather than the heart.  A Brechtian staging also draws the audience’s attention to the fact that what they are watching is a play. The ‘artifice’ of the event was highlighted in this production with stagehands and technicians moving around openly on the stage. The set designers used a pure white backdrop, and projected onto it a series of ‘Post It’ notes, telling the audience where and when each scene was set. They made use of video projection, light and sound in place of set dressing. It is quite simple to project images and video onto a white backdrop. Is this something you could adapt for your own tight-budget production?

‘The Art of the Cart’

With the design principle established, the props department and set designer worked to make one central prop the focus of all the action. Debora Warner chose to make the cart that Mother Courage trades from the focus of the action. The cart goes through a journey in its appearance, as the story unfolds. At the beginning of the play we see a simple cart, but as the action progresses the prop is altered. The props designers increased the height of the cart as Mother Courage’s luck and wealth increases. She ends up sitting on top of an outsized vehicle, packed to the roof with possessions. Later, as her fortunes fade, and her children die, she is left destitute, and the cart is gradually stripped of its dressings. The final scene sees the cart appearing almost ‘skeletal’, with the sheeting sides in tatters, and Mother Courage herself hitched up to drag it along.

VIDEO: Designers discuss the development of the cart design here.

Your Ideas, Our Expertise

The idea of using one major prop in a production and adapting it to reflect the story is a provocative one for prop designers. Come and explore our props to see if there is one large prop that could become the centrepiece for the action in your own ‘credit crunch’ or tight budget production. Is there a way you could modify that item to reflect the action on stage, or to mirror the story? We are happy to discuss design ideas with customers, and can modify and customise props to your requirements. We even have a selection of carts for you to consider if you want to stage your own production of Mother Courage!