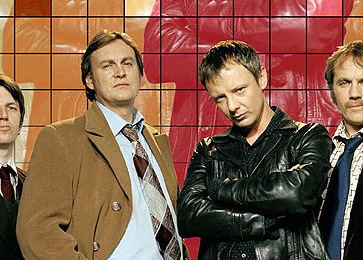 The Bill may not be on our screens anymore, but there are no shortage of police and crime dramas to take its place. Here we look at a number of crime dramas, and how the props departments of a production company go about setting a scene.

Set in the Whitechapel district of London’s East End in the late 1800s, the drama is based upon the idea that Jack the Ripper, whose last murder predates the first episode by six months, has returned. The action takes place in and amongst real London lowlife, inside factories, slums, public houses and brothels. Gritty, hard-hitting and violent, the series enjoyed critical acclaim. It was filmed almost exclusively in Dublin, Ireland, with many of the scenes being shot in Dublin’s Clancy Quays, the undeveloped parts of which were perfect for a Victorian London setting.

More filming was set in Kilmainham Gaol, which was first built in the 1790s, but was finally decommissioned in 1924. It was a perfect location for the Victorian era prison scenes, with heavy iron doors, bleak cells and gloomy interiors. We hire out identical Victorian Era prison doors, props and police items, such as period handcuffs and shackles, jailor’s keys and truncheons. These items are increasingly difficult to source, as older institutions are demolished to make way for the new.

Modern crime drama doesn’t come much classier than Broadchurch, ITV’s smash hit modern crime series, starring David Tennant and Olivia Coleman. Set in a village along the Dorset coast, filming was centred around Clevedon and West Bay in Bridport. The genre of modern detective and police procedural relies heavily on verisimilitude, meaning that the accuracy of the equipment and props is paramount. Luckily, it is easy to source modern props, since they are all available on the open market for police departments to buy in as stock. You could simply buy modern police equipment but it is extremely expensive. Renting from our wide range of items will keep you in budget.

The authenticity of modern props is not in question, so the issue you have is what exactly you need to create the look you’re after. Police stations tend to be fairly simply furnished, with simple modern tables and chairs in interview rooms. A great prop is the police interrogation tape recorder. Some police stations have a more relaxed and comfortable interviewing areas with soft furnishings, where they can interview more vulnerable visitors, such as children, to help put them at ease. You may just need a simple police lamp for outside the station, and these are available in period or modern designs.

In the case of forensic scenes, you can easily kit performers out in overalls, hairnets and booties, and have a simple case of generic laboratory items to give an illusion of a highly trained forensic team. You may want to use drug identification kits, crime scene tape, police evidence bags, and floodlights to light a murder scene. We also supply modern prison dressings, such as cell beds, and stainless steels sinks, basins and toilets. We don’t supply sniffer dogs, and detectives require little more than charisma and acting ability. All the rest we can help you with.