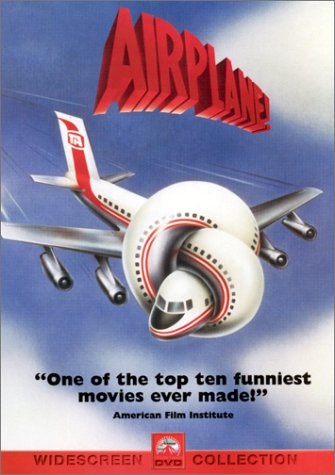 Dr Rumack: You’d better tell the Captain we’ve got to land as soon as we can. This woman has to be gotten to a hospital.

Elaine Dickinson: A hospital? What is it?

One of the best-loved comedy movies ever made was Airplane! Robert Hays, Julie Hagerty and Leslie Neilsen broke new ground with the first Airplane movie in 1980 and, in 2000, the American Film Institute voted it 10th Funniest Film of all time. It was a brilliant parody of plane disaster movies such as Zero Hour (1957) and Airport (1970). Writers Jim Abrahams and David and Jerry Zucker scripted a film classic that influenced many others comedies that followed. It went on to make $83m on its first release, with a budget of just $3.5m. Spin offs included the Naked Gun movies and Police Squad TV series. If you want to film a scene in a similar setting, here is a guide to the airplane props that we stock. We are confident we can stock any of the props you see in the Airplane! movie.

The airport scenes in Airplane! were shot on location at Los Angeles International Airport. If you need to set up an airport scene for TV or film, you will find the cost of hiring part of a working airport to be prohibitive. It is cheaper to film the scene in the studio, and we stock a huge selection of airport furniture, accessories and signs to help you dress the production  – everything you would need to set up an authentic airport terminal, in fact. Our items include Airport Check-in desks, Passport control, luggage conveyor belts, walk through scanners, rope barriers, luggage scales, trolleys, turnstiles, hundreds of signs and rows of airport seating.

The action in Airplane! takes place on board a Boeing 707, and was filmed on a set built at Universal Studios in California. Scenes take place in all areas of the plane, from the cockpit to the airhostess meal preparation areas. We have an entire plane interior available for hire and a multitude of items you will need to film a scene set inside a plane cabin. These items include a First Class plane section, window seat sections, seating rows, Economy and business class plane sections, lighted roof panels, galley section, hostess area, plane toilet cubical, food trolleys, aircraft main doors, emergency exit doors and cockpit doors; We also have a huge selection of switch gear to help you kit out a cockpit – just show us the design you are looking for and we can find switch gear to fit.

Look at our Aeroplane Interior section for the full range of props we have available.

You will need other sundry items for your production – the cast of Airplane needed a guitar for the singing nun, and a drip for the girl she was singing to, if you recall. We can provide you with almost any prop you need, from luggage to vending machines, telephones to waste bins. Have a good look around, either in person, or online and see what we’ve got.